The capital of Israel

Located in the Judean Hills, is the capital of Israel, the seat of government and the historical, spiritual and national center of the Jewish people since King David made it the capital of his kingdom over 3,000 years ago.

During its long history, Jerusalem has been destroyed twice, besieged 23 times, attacked 52 times, and captured and recaptured 44 times. The oldest part of the city was settled in the 4th millennium BCE.

Jerusalem has been the holiest city in Jewish tradition since, according to the Torah, King David of Israel first established it as the capital of the united Kingdom of Israel in c. 1000 BCE, and his son, King Solomon, commissioned the building of the First Temple in the city. 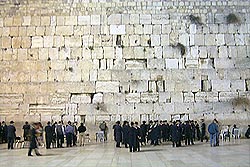 The “Western Wall” of the Temple Mount

All branches of the Israeli government are located in Jerusalem, including the Knesset (Israel’s parliament), the residences of the Prime Minister and President, and the Supreme Court.

Although Jerusalem is known primarily for its religious significance, the city is also home to many artistic and cultural venues.
The Israel Museum attracts nearly one million visitors a year, approximately one-third of them tourists. The 20-acre (81,000 square meter) museum complex comprises several buildings featuring special exhibits and extensive collections of Judaica, archaeological findings, and Israeli and European art. The Dead Sea scrolls, discovered in the mid-20th century in the Qumran Caves near the Dead Sea, are housed in the Museum’s Shrine of the Book. 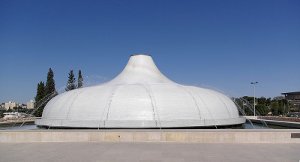 The Shrine of the Book

Many national institutions of Israel are located in Kiryat HaMemshala in Givat Ram in Jerusalem as a part of the Kiryat HaLeom project which is intended to create a large district that will house most government agencies and national cultural institutions. Some government buildings are located in Kiryat Menachem Begin. The city is home to the Knesset,[246] the Supreme Court,[247] the Bank of Israel, the National Headquarters of the Israel Police, the official residences of the President and Prime Minister, the Cabinet, and all ministries except for the Ministry of Defense (which is located in central Tel Aviv’s HaKirya district) and the Ministry of Agriculture and Rural Development (which is located in the Tel Aviv suburb of Rishon LeZion).

Jerusalem has been sacred to Judaism for roughly 3000 years. Jerusalem was the site of Solomon’s Temple and the Second Temple. It is mentioned in the Bible 632 times. Today, the Western Wall, a remnant of the wall surrounding the Second Temple, is a Jewish holy site second only to the Holy of Holies on the Temple Mount itself. Synagogues around the world are traditionally built with the Holy Ark facing Jerusalem, and Arks within Jerusalem face the “Holy of Holies”. As prescribed in the Mishna and codified in the Shulchan Aruch, daily prayers are recited while facing towards Jerusalem and the Temple Mount. Many Jews have “Mizrach” (meaning “East” – Towards Jerusalem) plaques hung on a wall of their homes to indicate the direction of prayer. 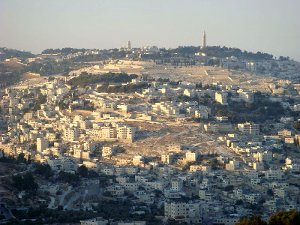