Elat is the southernmost city in Israel. Elat a tourist resort and port located at the northern tip of the Red Sea. Elat is home to 55,000 people. The city is part of the Southern Negev Desert, at the South end of the Arava.

Elat is connected to the rest of Israel internationally by air, road, and sea. Elat Airport is used for mostly domestic flights, international flights to the city often use Ovda International Airport. 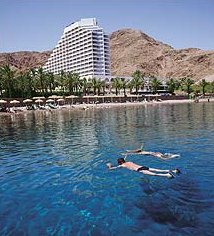 The Red Sea is also called the Gulf of Elat. The Coral World Underwater Observatory is where you can see beautiful fish and how they live. The Aquarium was one of the first ‘People Aquariums’ which lets people into a large underwater Plexiglas bubble to view the fish as the fish look at the people. Elat also has the Dolphin Reef where you can swim with the dolphins.

The Port of Elat is the only Israeli port on the Red Sea, located at the northern tip of the Gulf of Aqaba. The ship traffic in the port is comparatively low because there are no railroads coming into Elat and expanding the port would cause a disruption to tourism.