Located on the Mediterranean coast, Ashdod was built in 1957 it was incorporated as a city in 1968. The first modern Israeli settlement in Ashdod was made in 1955, and in 1965 the deep water port was completed. Being a planned city, expansion followed a main development plan, which facilitated traffic and prevented air pollution in the residential areas, despite population growth. 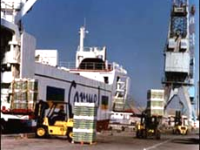 The Port of Ashdod

It is centered around Israel’s largest and newest port which was originally planned chiefly for the export of citrus fruit. Today it is a busy, thriving town with dock facilities and an electric power station.

The Port of Ashdod is situated about 40 kilometers south of Tel Aviv, adjoining the mouth of the Lakhish stream. It is Israel’s leading port after Haifa, accounting for about 60% of the country’s imported goods.

Construction is Ashdod’s main industry and its manufactures include synthetic fibers, woollen yarn, and knitted goods.

Ashdod is mentioned several times in the Torah:
Upon Joshua’s conquest of the Promised Land, Ashdod was alloted to the Tribe of Judah (Book of Joshua 15:46).

In I Samuel 6:17 Ashdod is mentioned among the principal Philistine cities. After capturing the Ark of the covenant from the Israelites, the Philistines took it to Ashdod and placed it in the temple of Dagon. The next morning Dagon was found prostrate before the Ark; on being restored to his place, he was on the following morning again found prostrate and broken. The people of Ashdod were smitten with boils; a plague of mice was sent over the land (1 Samuel 6:5) 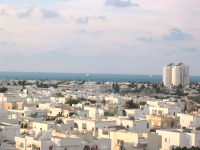 The Rooftops of Ashdod 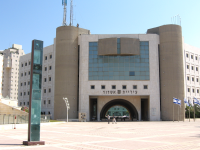 The City Hall in Ashdod